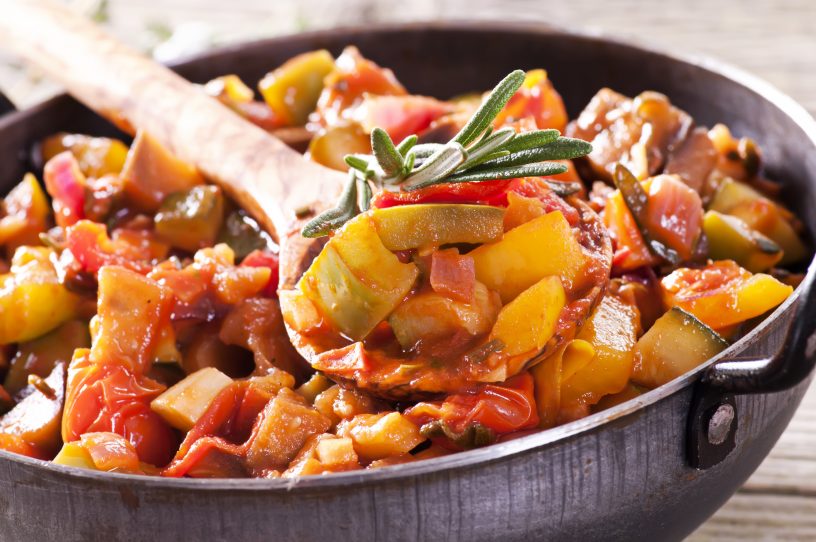 It’s a while since I added any recipes here. I cook regularly, at least several times a week, but I rarely write anything down. Occasionally my sons like something I cook so much, they write it down in their recipe book. Quite often, someone else will ask for the recipe for something I’ve cooked for them, and my usual reply is “there is no recipe, I just make it up as I go along”, the truth being that there’s always a basic recipe in my head but I don’t have to commit them to the written word. Once in a blue moon though, I’ll actually write it down for them, and when I do it goes here.

One such recipe request recently was made by the lovely (vegetarian) Jacqui. We gave her and Pete a tub of my ratatouille to save them having to cook one evening, a bit of a blessing when there’s a baby around. They both loved it, (non-vegetarian) Pete remarking that “if all ratatouille tasted like that, we’d eat it every night”.

So, here’s the recipe for my ratatouille, a wonderfully tasty, fragrant and versatile French Provençal dish full of the flavours of summer. It’s especially versatile given that it’s 100% vegan, so it’ll appeal to a wide audience. I’ve seen this dish bastardised, trampled on, ruined, and generally overcomplicated by cooks and chefs of varying calibres – but it’s best done just like this, plain and simple, getting its complex flavours from lovely fresh ingredients and long cooking. There are some things so good, you really don’t have to change them.

Serves: a large family, with leftovers

Ratatouille is best cooked in an enamelled cast iron pot such as a classic Le Creuset casserole, but you can do it in a large heavy-bottomed saucepan too. I use tinned tomatoes because they’re generally superior for cooking to the tomatoes you can buy in supermarkets and shops in the UK. The aubergines (egg plant) are added last to avoid them sponging up all the oil.

Fry the onion in the olive oil until softening and translucent but not coloured, adding the peppers and the woody herbs including stalks (not the basil) after a couple of minutes. Add the garlic, fennel and courgettes, and continue to fry for a few minutes. Add the aubergine last, then add a small heap of freshly ground black pepper, stir, put the lid on the pan and sweat the vegetables for a couple of minutes. Add the tomatoes and tomato purée, stir well, bring to the boil, then put the lid on and simmer gently for 1.5 hours. The vegetables should be soft and slightly falling apart, and the flavours should be well combined. Take off the heat, remove the woody herb stalks, season with salt and freshly ground black pepper to taste. Add the bunch of basil leaves, then stir and replace the lid.

Serve as an accompaniment to anything… pan fried pork loin steaks, sea bass, pasta, boiled rice… or just eat it with some crusty bread. It’s even lovely served cold, and can turn cold cooked rice into a fabulous rice salad.