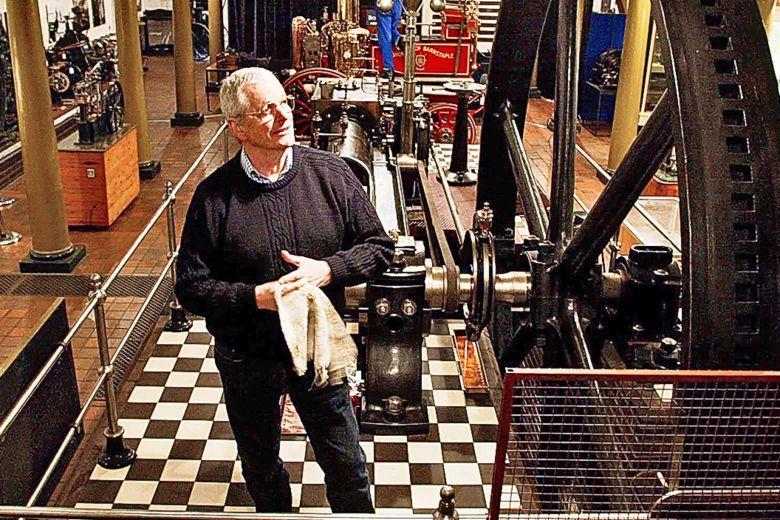 The British Engineerium was the creation of one man, and his ability to lead others on a journey. That one man was Jonathan Minns, and my father and I were among the first of the others.

We first met Jonathan Minns when we were at Hove Park, parked close to the old Goldstone Pumping Station which had been derelict for my whole life. Hearing banging and other signs and sounds of activity, we went to investigate.

An open gate led to an open wooden door at the front of the old engine room. Peering inside and calling a tentative “hello” we were greeted warmly by a tall, thin, well-spoken man in a dirty blue boilersuit with a huge smile who introduced himself as Jonathan Minns and explained that he was converting this old pumping station into a sort of living steam museum, an Engineerium. He managed to find a piece of paper and a pencil from underneath tools and pieces of oily rag and machined brass, and signed us up as members, there and then… Lifetime members, he said, since we were among the first. That was 1975, and I was 8 years old. The Engineerium finally opened to the public when I was 9.

Membership of the Engineerium came with opportunies. One could learn loads, operate and maintain massive steam engines and their equally massive boilers, and generally volunteer for any number of jobs from staffing the ticket office to curating the museum’s enormous collections of exhibits large and small.

Of course, at age 9 a lot of this wasn’t possible. But the scale and majesty of the machinery wasn’t lost on me. I marveled at how such huge beam engines and transverse engines could operate so smoothly and silently. I learned how centrifugal governors worked. I learned about the subtleties of working with the properties of steam and atmospheric pressure, including how condensing engines worked. I even insisted on performing the collapsing container experiment at home with an empty cooking oil can (donated by the very friendly, very tall owner of the Hove Rendezvous Chinese restaurant in Church Road).

Membership yielded many happy visits to the growing museum. As time went on and I passed 10th, 11th and 12th birthdays and beyond, we received regular newsletters, rich with direct contributions from Jonathan as well as the members. There were members’ outings too, particularly memorable ones being to the Kempton Park Pumping Station in South London, and to Tenterden by vintage bus to see the preserved Kent and East Sussex steam railway and the Seeboard Milne Museum of Electricity in Tonbridge. I don’t remember there being any other children in those of the membership who I met; and therein may have been a missed opportunity to enthuse fresh minds and cultivate future membership.

As I got older, my interests grew away from mechanical engineering and more towards electronics and computing. Although robotics could have drawn me back in, the gulf between 19th century steam technology and cycloidal drives was too great, and I grew apart from the Engineerium. I still returned for visits, the last time being in around 2001. That was a wonderful and nostalgic visit with my son Ben, who was similarly fascinated by the massive machinery and the beautifully crafted models, though too young at the time to get involved.

And now the Engineerium is no more, having closed for the last time in 2006. Jonathan died in 2013. The place was bought by Brighton businessman Mike Holland with the stated intention and ambitious plans of reopening the British Engineerium, but apart from a few select open days it wasn’t to be, and various twists of fate in his fortunes led to sale. It’s now been purchased for conversion as a wellness centre, which, whilst it may lead to the preservation of the buildings, will undoubtedly not be celebrating science, technology and engineering.

A sad ending for such a great creation; the altruistic gift bestowed by one man’s vision and hard work to a town that didn’t care enough about its engineering heritage to keep it.

End of the line for British engineering museum

More photos of The Engineerium