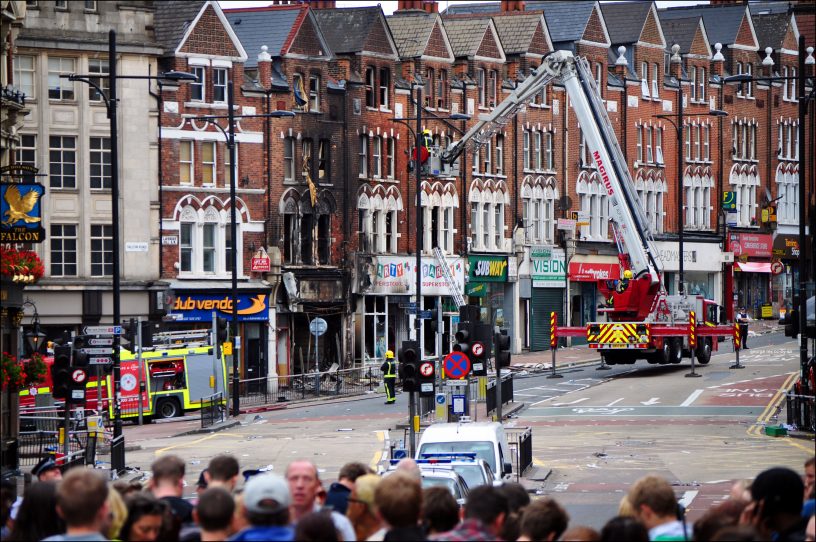 The so-called riots in London are of course just theft, looting, arson and vandalism on a large organised scale. Disgusting and offensive as this may be, we have to ask ourselves why it has happened, and what we can do about it.

I’ve been claiming for years that our government leadership is weak, and it is this weakness that has caused this problem and goes on perpetuating it. We live in a democracy – which is actually a coalition of the meek. We’re the meek, the ones who want to live a gentle and peaceful life, with everything well ordered and civilised, where you work hard to achieve what you can, and you raise your children to have values which are not hugely at odds with those of the rest of society. The meek pay their taxes and elect strong leaders who can spend our money to organise the things that we don’t really want to have to deal with on our doorsteps – like education, social care, law and order, and defence.

So why are the riots happening? Because there are criminal elements at large who believe that in large numbers, covering their faces, they can get away with anything. So far, they’re right – because our political leadership is weak, blustering, full of hot air and with no stomach for decisive action – which sends a terrible message to those waiting in the second wave. The Police try their best but they’re outnumbered and outmanoeuvred. There are minority pockets of people all over the country who don’t care about anything except material goods, and if they think they can just take what they want, they will.

David Cameron and his government should take this as their Falklands, and either deal with it swiftly and decisively, stamping on the criminals with all necessary force… or step down, and let someone else have a go. The trouble is, we didn’t like our strong leaders because they spoke harshly to us and weren’t good media managers, so all we’re left with these days is pathetic ex-public schoolboy career politicians who would rather make us fearful of Islamic fundamentalists than to actually tackle the nation’s internal problems. Ah well, at least we only have ourselves to blame.