When an airline destroys your suitcase on your outbound flight, you’d like to expect that they’d be not only apologetic but also perhaps actively help you find a replacement for the journey home. Alas in Monarch’s case they failed on every step of the way to customer service satisfaction.

We reported the completely smashed International Traveller hard-shell suitcase at Grenoble Airport, where we did the necessary paperwork and were told we’d have to contact Monarch within seven days in order to claim compensation. That meant we’d have to do it while we were in France. The suitcase was unsalvageable so we’d also have to source a replacement whilst in the ski resort of La Plagne, where it’s easy to find ski or snowboarding stuff but incredibly hard (and expensive) to get items such as suitcases.

So, during the week we took time out from what we were meant to be doing on a skiing holiday to talk to Monarch about the claim and find a new suitcase. All we had was mobile phone, so at our great cost we called Monarch and held on listening to some of the most expensive hold-music ever created, before speaking to a lady who took all our details and offered us a measly £45 compensation. As I said, it’s incredibly hard finding something so mundane as a suitcase in a skiing resort with village/small town facilities and a single-minded focus on snow sports. On the third trip around the shops my girlfriend managed to find a large Ripcurl bag for €130, which at the time was near enough £130 – leaving us with a whopping £85 shortfall on a new bag which we were only buying because our suitcase had been smashed by people working on behalf of Monarch Airlines. Oh, and nothing to say sorry for all the time wasted, skiing missed and roaming phone costs endured.

Around 10 days after we returned, the cheque for £45 turned up in the post along with a letter that was full of empty apologetic platitudes which had exactly the same effect as if they’d included a hand-scribbled note saying “sod off and don’t waste our time in future”. Completely meaningless, corporate waffle, devoid of any real conviction, and rendered meaningless by the accompanying derisory compensation. All of which leads me to the unescapable conclusion that Monarch Airlines doesn’t actually care about its customers at all, and in a cut-throat and competitive market place, that is surely a rather stupid attitude to have. 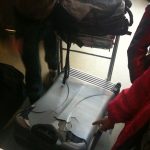 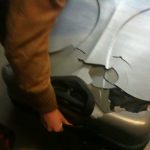